How Much Did the Irish Times Get Paid to Syndicate CCP Propaganda?

In between ritualistic denouncements of both the far right and lockdown scepticism, the Irish Times took time out this week to print a full page paid advertisement singing the praises of China’s ruling CCP.

Syndicated in their Wednesday edition, the piece was penned by Chinese ambassador to Ireland He Xiandong, extolling the necessity of positive relations with the emergent Asian hegemon. 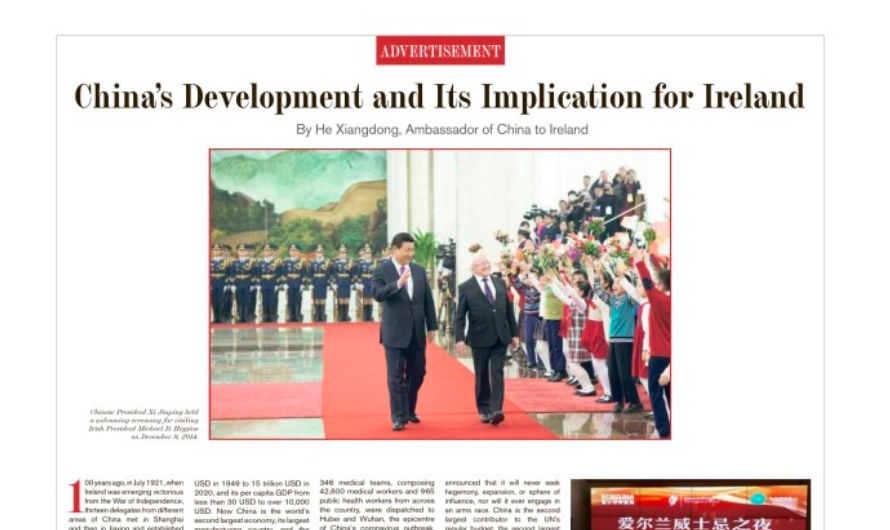 Drawing comparisons between our revolutionary struggle in the 1920s and that of the early CCP, the article was keen to emphasise the public support for the Chinese regime, as well as China’s role in Ireland’s economic future. Stridently unapologetic for the Chinese government, the piece concludes by arguing for increased ties, as well as advertising the planned Belt and Road Initiative.

Located on page 5, the full page colour advert was unlikely to have come cheap, with estimates from the Irish Times own advertising listings putting the price tag in the region of €34,000. Paid for it seems by the Embassy of the People’s Republic, it certainly blows holes in any moral authority the Old Lady of D’Olier Street had regarding pontificating on matters of human rights.

Buying the print edition of the paper to maintain for future reference, I noticed how odd the advert was juxtaposed alongside the paper’s nominally liberal tone. With not a hint of irony a few pages after the advert was condemnation of Orbán’s supposedly dictatorial overreach as well as continued soft coverage of the technocrats at NPHET.

The advert comes amid renewed criticism of Chinese meddling in Irish and Western affairs, with controversy stirred over the role Huawei and CCP funded Confucius Institute’s have operating in conjunction with Chinese security services. Internationally, a greater awareness has grown about the extent to which Chinese intelligence agencies have penetrated Western business and civic apparatuses, with journalism among the targets.

As far as financials go, the Irish Times is surprisingly buoyant according to financial figures released by their governing Trust. However, taking Beejing’s silver for a propaganda piece must severely undercut any moral standing held by our national paper of record.

If the Irish Times had accepted an advert from an American conservative group, left wing Twitter would no doubt be ablaze with accusations of far right dark money influencing our politics. Where are these same individuals now?

Generally this author is not the most hawkish against Beijing. A multipolar world is to be welcomed, and certainly the geopolitical rift with China is largely cynical, driven by globalists formerly wishing to integrate the Asiatic giant.

While not overly paranoid about certain hysteria around China it is clear some of our elites are potentially compromised by their involvement with the Chinese state and its appendages. A textbook example of this would be the entanglement of former Fine Gael leader Alan Dukes with the advisory board Youxie, labelled by some as being a CCP front. There are no doubt more examples.

All being said, any believer of Christian Civilisation must hold absolute revulsion at the actions and practices of the Chinese Communist Party, especially the threat they pose to Western autonomy. That’s not to neglect or excuse the current abuses by current the American Imperium on traditional societies globally.

While not showing on their online website, I’ll be keeping a cutout of the propaganda piece. Should the guns start blazing with formal hostilities between China and the West, it may very well come in handy. Hopefully the next Fintan O’Toole or Una Mullaly OpEd will be deflated by the fact the paper in question pays their wages through the gold of foreign despotisms.

Evidently those running the Irish Times have put a price on their scruples.