Long being a staple of contemporary Irish culture, last night we were once again faced with the event that most closely resembles a national religious rite on a parasocial level. With close to all readers being undoubtedly raised watching the Toy Show, myself included, it has become an annual occurrence to strap in for those long two hours and see what comes.

The Toy Show for many can be seen as a cultural bellwether, an insight into the minds of RTE producers of what they themselves view the children of Ireland to be. You have to keep in mind that similar to all film, television, and advertisement casting there are no coincidences or mistakes in regard to who gets the part, it is an extremely thorough process.

In analysing this show it is made all the more difficult as the ‘subject matter’ is children. Much of the toys they are assigned to review, the clothes they wear, and the jokes they are fed are not of their own choice but that of the show’s producer or at least their parents. No doubt some of them look upon their contemporaries working in South African cobalt mines and wonder if the cringe foisted upon them is not just as heavy a burden. Nonetheless, this does not negate that from an objective standpoint one can look at the individual toy segments and draw conclusions as to why specific toys and children were shown.

In my opinion the very first scene of the show tells all. Even the most ardent liberals were probably suppressing their initial reactions to what was put forward as the youth of Ireland. As stated above this was no mistake, those children were hand picked on purpose to send a message.

It is also quite amusing that the show directors chose to place dance and theater kids from upper middle class backgrounds (judging from their accents) into an obviously working class Dublin flats setting. This was probably Tub’s first time venturing into a working class estate and was no doubt plagued by anxiety at the idea of confronting another hostile  Gym-Bro (sources tell me their populations have swelled in recent years).

As always, the conductor of the show was the Late Late Show’s host, Ryan Tubridy . Tubs has managed to foster a strange love-hate relationship with viewers of the Toy Show for the past several years due to his common impatient and sometimes outright rude comments to the more excitable children on the show being excused as humorous and par for the course, rather than called up for what they are. And last night was no different.

I myself with a high cringe tolerance found some parts of the show near unbearable to watch due to Tubs’ obvious loathing of some of the children.

Ryan Tubridy is a very very proud man. Ask yourself this – when he became the host of Ireland’s premier talk show did he imagine himself in the situations we saw last night? We all saw it, the moment that the first mulatto child took the reins of the show and made Tubs submit to the pupil stinging stream of diversity bubbles, he looked like a broken man. I feel as though this may have thrown Tubs off kilter for the rest of the show, with his pride already hurting, his patience hanging by a thread. Or maybe he was just on a downer. 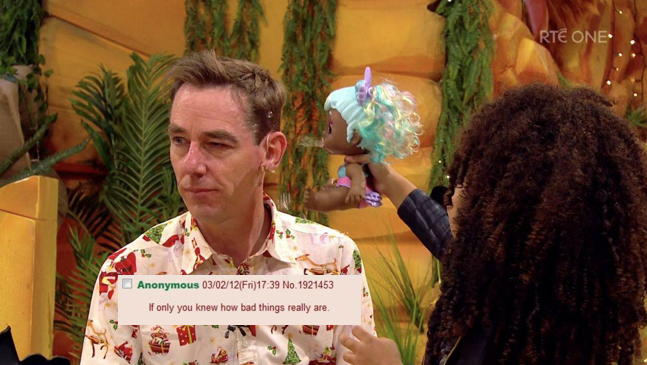 Growing up watching the far more serious demeanor of Pat Kenny, I cannot recall the same  ritualistic humiliation of the Host being made to dress up and dance for cheap laughs and badly sung musical numbers. It seems Tubs showing up in these ‘furry’ like costumes has become a staple of the show now, swallowing up more and more airtime each year. 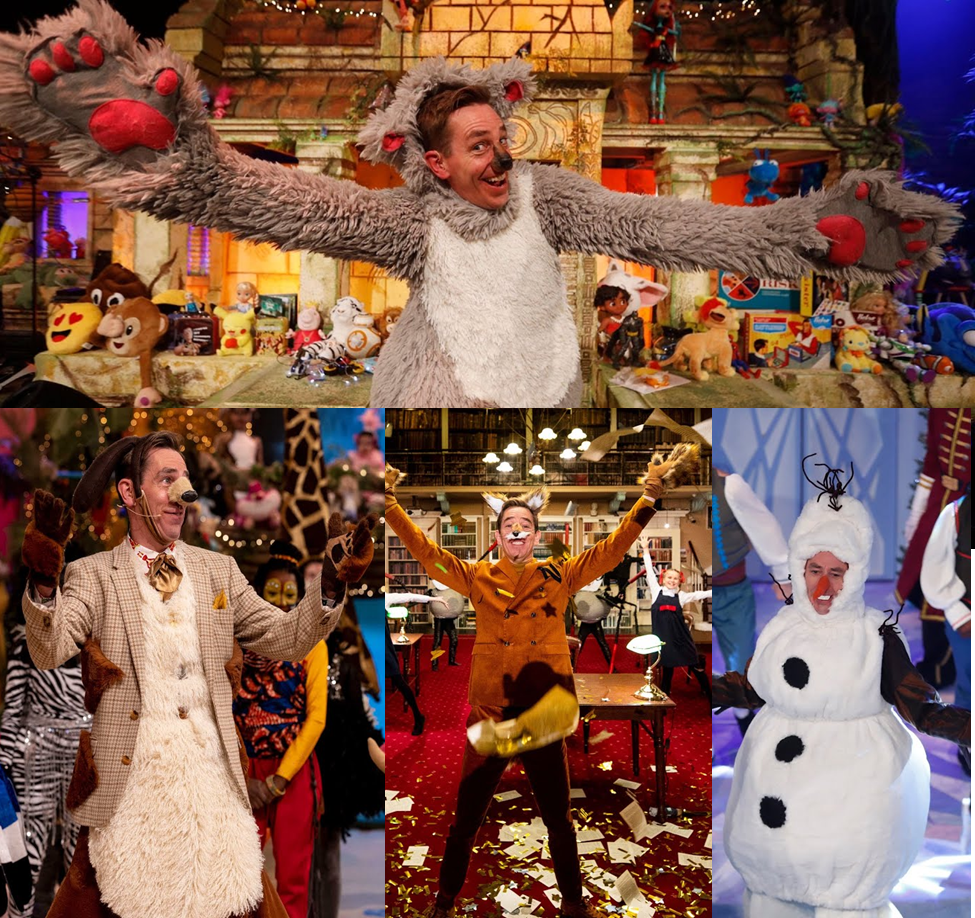 The only acceptable costume was Tub’s 2017 sly wink to Jordan Peterson’s Lobster grindset. 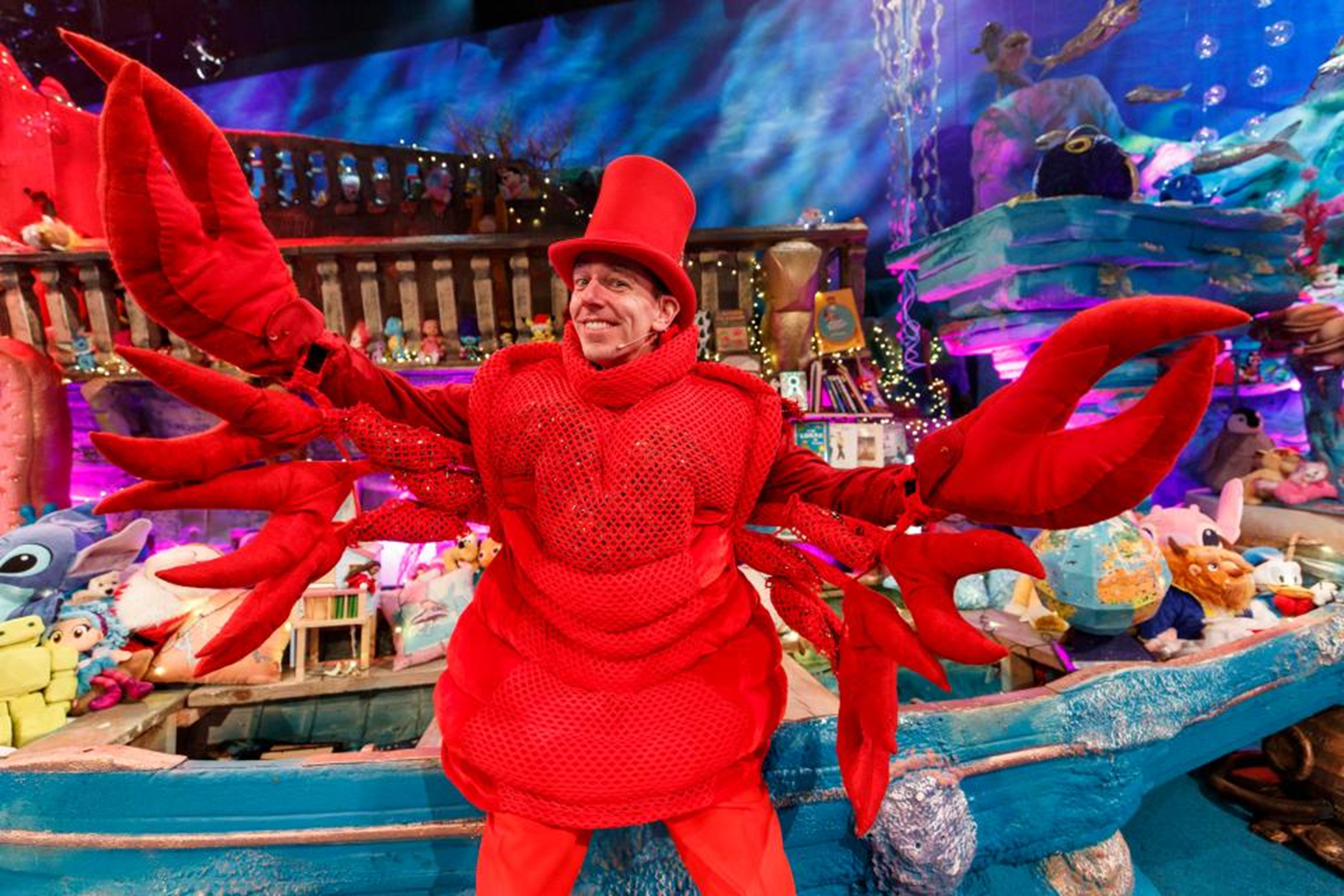 As for the children and toys. Well for a special that was originally meant to showcase toys  children would ask Santa for Christmas this year we saw a real lack of any. There was a real sense of urgency from Tubs when hopping from segment to segment and viewers will struggle to name any standout toys a child would really want nowadays.

Off the top of my head there were a few Bratz bubble dolls made unforgettable for obvious reasons, some dinosaurs shown off by a very intelligent little ginger girl, some legos, and a young cavan man with his model cattle. Looking at RTE’s website you can see that a large portion of the toys listed were never seen nor discussed.

This illustrates a very subtle move on RTE’s part that was probably only realised by few last night. The Late Late Toy Show is not a show for children anymore, it is a show for millennials to feel nostalgic about while passing around ‘that’s literally me’ memes related to pints, being drunk/hungover, or having terrible personal finances.

Another gradual trend the show has been on for the last while has been the slow phasing out of all things Christmassy. Looking at the stage last night you’d be hard pressed to discern any festive decor or ambiance. In fact the African – Lion King theme could not have better personified the move to strip away all things Yuletide.

Ultimately I believe everyone felt that something was missing this year, the show had no soul. It could have been aired in mid July and been the exact same. Frankly, this is to be expected. In the name of diversity, inclusion, and progress even the most watered down mainstream showings of tradition and religion will be erased and replaced with consumerism, irony, and reddit-ter memes.

Cringe reached its apotheosis during Tub’s interaction with a Kamala Harris-devoted child. From the moment this future-Social Democrats candidate celebrated Harris being the “first female and first African-American vice president”, the few lucid members of the live studio audience undoubtedly questioned whether they had accidentally entered Dante’s Inferno. What followed was a a contrived mess of moral proselytising and a mindfulness seminar; a pastiche of shitlibery, narcissism, faux talent, posturing confidence, and embarrassment on behalf of those watching. Yet, the child is but a child – it is the parents who are to blame.

Undoubtedly, she is the spawn of a pushy, overbearing mother and a pushover father, whose agreeableness engenders the tyrannical domestic rule of the former materfamilias. Her ‘Educate Together’ schooling and weekend South Dublin drama school classes created a child who quotes mediocrities like Kamala Harris and reads anti-racist fanfiction about a dead yank president. In 1984, O’Brien states: “If you want a picture of the future, imagine a boot stamping on a human face— forever.” After watching the Late Late Show, I’m certain I’ve witnessed a worse future.

If I were a betting man I would predict two things about the future of the Late Late Toy Show. Firstly, the curtailing of the show to the millennial and zoomer audiences will only increase. Expect to see more Micheal D. plush teddies and other novelty toys aimed at 30 year old bugmen along with more staged meme moments perfectly designed for r/IrishSimpsonsFans. Secondly, I would not be surprised if a change in hosting is put in place.

Tub’s quite obviously takes no pleasure for this spectacle and I doubt I was the only one to see how much better Kelly Harrington was with the two girls for the brief time she was on. I think a host duo is eventually on the cards, most likely with a woman to fit quotas, and I’m not even mad about this, anything that takes airtime away from Tub’s is a win in my books.

While the 2020 viewership of the Toy Show became the most watched Irish television programme in history, you have to ask if it’s all downhill from here? My gut tells me the prized annual will never again reach such heights.